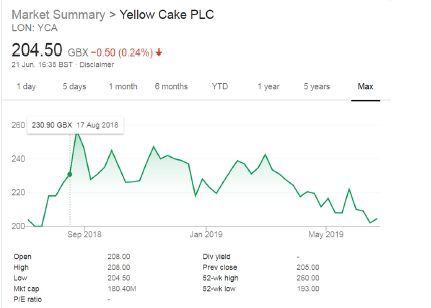 Yellow Cake is an AIM market share that specialises in the investing and holding of physical Uranium that came to the market in July 2018. The company is offering direct exposure to the spot uranium price without exploration, development, mining or processing risk.

Since coming to the market, the company have been rather flat share price-wise, as seen below. Yellow Cake offers good long-term potential dependant on the direction of the Uranium spot price, which currently is at the bottom of its range.

Uranium decreased 4.30 USD/LBS or 14.90% since the beginning of 2019, according to trading on a contract for difference (CFD) that tracks the benchmark market for this commodity. Historically, Uranium reached an all-time high of 143 in May of 2007 and a record low of 7.10 in December of 2000.

For new investors to the area of Uranium, there are a lot of variables to consider. Firstly, it is important to note that Uranium does not trade on an open market like other commodities. Buyers and sellers negotiate contracts privately and prices are published by independent market consultants. As we can see there has been a large correction in the Uranium price since the early 2008. This occurred due to what was known as the Uranium Bubble of 2007, caused by concerns over global warming and other viable clean energy sources, but also speculation on small exploration stocks that drive the Uranium prices up. Furthermore, one key mine was flooded in 2007, causing a perceived disruption to supply. Since the Fukushima disaster in 2011, which did no favours for the Uranium price, the activity levels have remained largely flat. Until recently.

Kazakhstan is one of the world’s largest and lowest-cost uranium producers and Yellow Cake has managed to secure a supply contract with Kazakh miner Kazatomprom, to acquire long term supply in excess of 200million of Uranium at present. This level is growing with the scope for Yellow Cake to purchase more at discounted levels.

Yellow Cake is betting on the fact Uranium is “structurally mispriced”. Nuclear power’s low operating cost and carbon emissions are likely to ensure it is a strategic element of the global power supply. It is important to consider currently a large percentage of producers are loss making at present with Uranium prices near record lows. More recently, China and India have expressed significant interest in further investment in nuclear technology with more production facilities coming online.

In late 2017 Kazakhstan, the world’s top-producing uranium country, announced it would cut production by 20 percent over three years. This output reduction was further exacerbated this year, when Cameco announced it would indefinitely close its McArthur uranium mine and Key Lake mill located in the Athabasca Basin region of Saskatchewan.

With Uranium and Yellow Cakes price correlated, what the company needs is a catalyst to push up the price of Uranium. We may see this with the current talks with Donald Trump regarding the supply of the long-term Uranium exports into the US. The US stance is a defensive one, to protect the domestic production, but the nuclear industry as a whole may lose out if further tariffs are imposed. If talks lead to a continuation of supply import-wise or even an increase, this could spike the price of Uranium. More importantly, long term supply contracts are coming to an end in places like China and India, these will need to be renegotiated- the holders of Uranium could dictate terms if a supply crunch causes price spikes.

We believe Yellow Cake is well placed to capture any potential upside to the Uranium Price, and represents a good longer-term play on the commodity due to its strategic partnership with Kazakhstan.

We hope you enjoyed this report from London Stone, please note it cannot be construed as financial advice, and does not represent a financial promotion.
Staff of London Stone may hold an interest in the above stocks.