When Nothing is Straightforward in the Markets 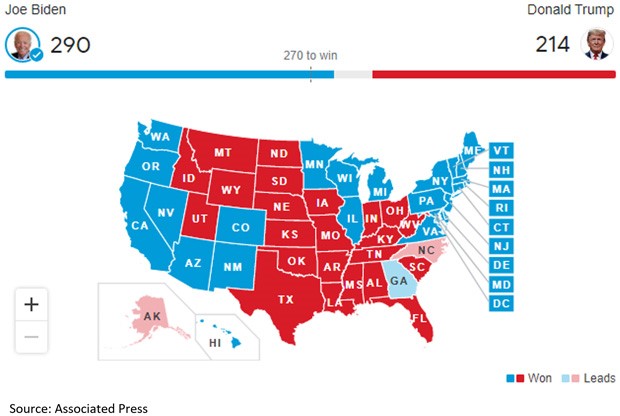 November started with a bang. And welcome to what is historically the best thee-month period of the year for the US stock market. Setting the scene, the presidential election brought the drama we all expected. In the event of losing at the ballot box, President Trump was never going to depart quietly after a turbulent four years. But Joe Biden is currently the heir-presumptive, notwithstanding what could be a drawn-out legal challenge.

The winner of the presidential election was always going to have to contend with deep divisions in American society. The fact that the Senate looks likely to remain in the hands of the Republican Party only reinforces the potential for a split in government under a Biden presidency.

Presidential election outcome as called by the Associated Press

In the run-up to the election, investors had been bullish on the prospect of a so-called Democratic “blue wave”. This was based on the idea that strong co-ordinated intervention, including massive additional fiscal stimulus spending, would be on the table. With the prospect of a Democrat party sweep receding, equity investors switched tack and embraced the likelihood of a divided government. They latched onto the idea that Republicans in the Senate would restrain Biden’s ability to impose higher taxes on companies, individuals and investment income, at least until the mid-term elections.

The balance in government also suggests that technology, banks, healthcare and energy companies would be less likely to face tougher regulations. Maintaining the current level of US corporation tax should help companies keep more of their profits, which will help drive earnings expectations for 2021 and beyond. There’s also hope for a more conciliatory tone with China in relation to trade talks. In addition, Biden is not expected to challenge the Federal Reserve’s stance on maintaining interest rates lower for longer. Indeed, because a fiscal boost could be delayed under a divided government, the Fed is more likely to have to step up and provide monetary stimulus. So the earlier chorus of support for a blue wave has now shifted to analysts deciding that a split administration was indeed the best outcome for markets.

The truth is investors had waited on the sidelines for election clarity. Pent-up demand was ready to support another rally. Nowhere was this more evident than when positive coronavirus vaccine news drove major buying in previously oversold sectors, pushing the Dow Jones Industrial Average up over 1,500 points. This saw rotation out of names that had benefited from the “stay at home” investment theme into companies that are positioned for a stabilising economy.

Pfizer announced the COVID-19 vaccine candidate currently being created in alliance with German firm BioNTech achieved success in the first interim analysis of a Phase 3 study. The companies said the BNT162b2 vaccine candidate was found to be more than 90% effective in preventing COVID-19 in trial participants without previous evidence of SARS-CoV-2 infection. They plan to request for Emergency Use Authorisation (EUA) use from the Food and Drug Administration (FDA) soon after safety milestones are met.

This was clearly a positive, but UK investors still need to maintain perspective. There is little sign that COVID-19 is coming under control in the US. Europe, meanwhile, has reintroduced lockdowns. If it mutates, or gains ferocity during the winter, it can throw up major new challenges. It’s also unclear as to how Biden will approach the pandemic, though there is an expectation that his approach will be one of containment. Even if it’s not a full lockdown, the outcome of such a strategy could be to curtail economic activity, which is something the market doesn’t need.

Disclaimer: All investments involve risk and you should only invest capital that you can afford to put at risk. The content of this report is not financial promotion or investment advice. It is general information for reading purposes and you should speak to a financial advisor before investing.