It appears that it’s not just Covid-19 that we need to be concerned about because in recent months we have seen an escalation in fraudulent financial cases which is causing companies to buckle. Whether or not these frauds are coming to light because of the pandemic doesn’t actually matter because eventually a fraud will be found out. What’s worrying is that they are not being picked up even by the most savvy of investors.
To paraphrase Oscar Wilde, to lose EUR1bn may be regarded as a misfortune; to lose EUR2bn (well, EUR1.9bn) looks like carelessness. This is the story of Wirecard. But this is a story of more than just carelessness. This really is about fraud.
Wirecard had been a favourite of the European financial community for some time. It started life as a payment processor before morphing into a developer of software for online transactions. It wasn’t until 18 June, when Wirecard announced its auditors couldn’t locate EUR1.9bn (about four-fifths of its net cash) that a scandal building in the background really hit the headlines.
The demise of Germany’s fintech darling did more than just expose a massive hole in the accounts of the company. It showed a significant lack of oversight by the country’s regulatory regime, particularly as several short sellers, and a group of Financial Times journalists, had for years been warning about accounting irregularities. Stock market analysts also did not cover themselves in glory, continuing to maintain positive recommendations on the stock, despite the concerns raised. 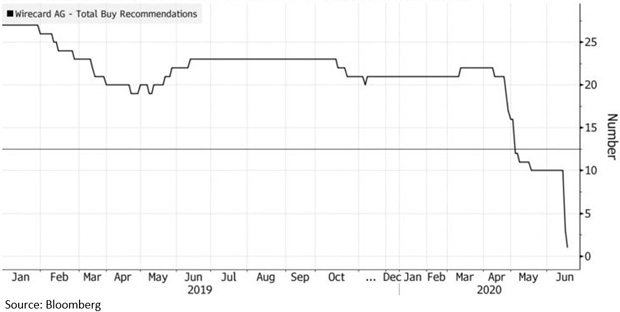 News of the missing cash sparked a sharp slide in the company’s share price and the departure of Markus Braun, CEO since 2002. In a resignation note, Braun said, “Responsibility for all business transactions lies with the CEO.” It didn’t take long for German prosecutors to agree, arresting him on suspicion of accounting fraud and market manipulation a few days later. Within three more days the company’s new management began insolvency proceedings.
Only two years ago, the company joined Germany’s blue-chip 30-company DAX stock index. But shortly after that milestone, the FT in January 2019 reported anomalies in Wirecard’s accounting, saying Asian units had inflated sales and profits. As the company launched an internal investigation, short sellers piled in and soon controlled 14% of Wirecard’s stock.
Wirecard naturally denied the FT story, but subsequent stories about company-sponsored intimidation should have been red flags. The lead reporter on the story was trolled on Twitter by shareholders and possibly Wirecard staff. The company was also accused of putting the journalists under surveillance. The CEO denied any wrongdoing and continued with the party line, as recently as May tweeting that “when all the noise and dust settles” investors would again recognise the company’s huge potential.
Crucially, BaFin, Germany’s regulator failed in its duties. The watchdog investigated whether Wirecard had failed to meet its disclosure obligations, but it also banned shorting the company’s stock. This was the first time it had ever taken such a step. The regulator also probed possible market manipulation by short sellers colluding with journalists, implying an alternative agenda by the FT.
Having dropped sharply in the wake of the initial FT report, for more than a year the shares rose and fell on various allegations of wrongdoing that were inevitably followed by company assurances that everything was fine. The CEO even met with Paul Achleitner, the head of Deutsche Bank’s supervisory board, to discuss a tie-up. There were suggestions that Wirecard would even buy the venerable institution.
Everything changed when Wirecard disclosed the missing EUR1bn and withdrew its financial results for fiscal 2019 and the first quarter of 2020. The following day, two Philippine banks, believed to be holding the cash, denied that Wirecard had ever been a client. Meanwhile, the Philippines central bank later said the funds had never entered the country’s financial system. Wirecard subsequently acknowledged the money probably doesn’t exist. Forged contracts, sketchy transactions and non-existent corporate customers, all came to light.
Receive Latest News