The gap in performance between the tech-biased Nasdaq Composite and its rival benchmarks in the first half of 2020 has been dramatic. The index has enjoyed an ever-widening lead between itself and the Dow Jones Industrial Average and the S&P 500 index.
Much of this is down to the perceived resilience that technology companies have within the pandemic. The theory is that the structural growth these stocks offer is more immune than the cyclical growth seen elsewhere in the market.
The Nasdaq rose an impressive 12% in the first half of the year. Meanwhile, the Dow fell 9.6%, the S&P 500 was down around 4% and the small-capitalisation Russell 2000 index was off more than 15% over the period.
The main benchmarks staged a strong resurgence from the lows of March. From then until the end of the first half of the year, the Dow gained about 37%, the S&P 500 gained 36% and the Russell 2000 climbed 41%, while the Nasdaq surged by more than 43%. Ultimately, this underpinned the Nasdaq’s better first half performance.
According to Dow Jones Market Data, the last time the Nasdaq was higher in the middle of the year while the Dow and S&P 500 were down was back in 1977. This is also only the second such occurrence since the Nasdaq was formed in 1971.
The Nasdaq is also enjoying the best outperformance against the Dow since 1983, when it had a 20.3-percentage-point lead. It’s also the widest half-year divergence between the Dow and the S&P 500 since 1983, when it held a 17.6-percentage-point lead. 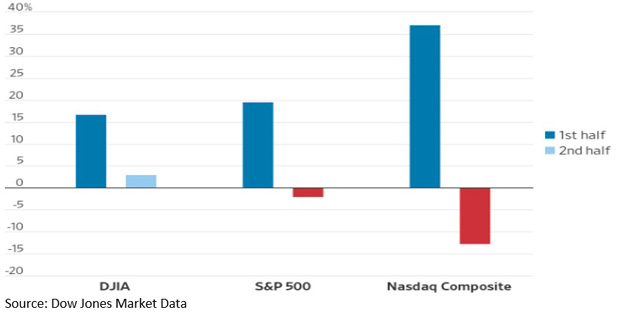