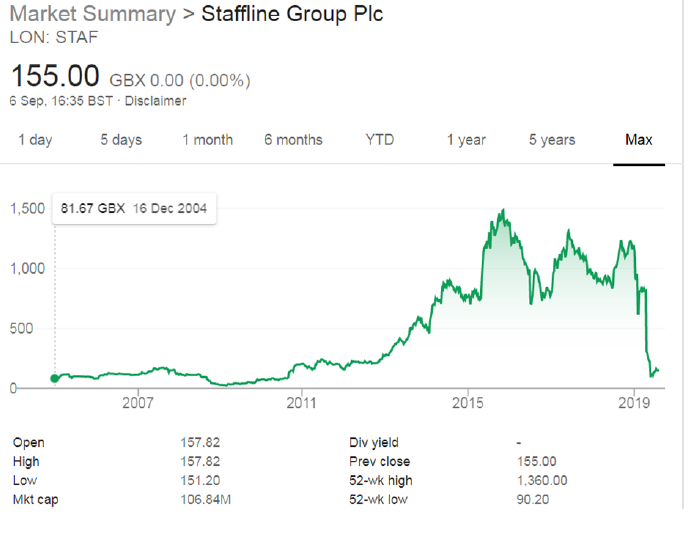 Today we examine Staffline, one of the UKs largest recruiter/employment agencies.

Staffline is a leading outsourcing organisation providing services, mainly in the UK and Eire, to both Government and commercial customers. The Staffing division supplies up to 52,000 workers per day to more than 1,500 clients. The People Plus division is a leading provider to both Central and Local Government, offering a wide range of services to help and support in the Employability (Welfare to Work), Communities and Skills arenas. The company was founded in 1986 and admitted to the public via the AIM market in 2004- since then, it has gone from strength to strength but only recently has been demolished by various scandals.

As we can see from the above graph the company has shown investors a pretty decent return over the long term, but within the last year the company’s shares have collapsed nearly 86% – the 52-week high is 1360p and the low was hit around the 90p mark. The catalyst for the fall happened in June, when the company announced they were delaying their public accounts to factor in an accounting scandal relating to minimum wage payments over a 6-year period.

The agency announced it was setting aside £15.1 million to cover the cost of the underpayment of workers, almost double the sum it had previously allocated. Its shares were suspended for six weeks earlier this year. Then in August the company’s auditor PWC later resigned from its position. PwC cautioned in the annual report that there is ‘a significant amount of uncertainty regarding the valuation and timing of payment of this liability’ and a risk that it could be ‘materially different’.

The resignation pushed the share price further lower and the company had also earlier in the year problems involving HMRC. So, with all this being said, what makes Staffline an interesting yet risky proposition? Well for starters the company makes over £1billion in revenue, has 62million in debt and is a profit-making company- according to its latest reports. The market cap stands at around £106million. Staffline has a number of lucrative blue-chip clients it works with, such as Sainsburys, Hermes, DHL, and Argos to name a few.

The company received a record 50,000 applications via its online website in May this year.

Now let us touch on the real reason why we should look at Staffline- On 31 July 2019, Singapore-based recruitment firm HRnetGroup acquired a 25.02% stake in Staffline Group, which is now an associate company of HRnetGroup. The company acquired 11.7 million shares in Staffline Group PLC at 180 pence each. We are trading now at around 155p 25p away from the price paid by HRnetGroup. The company has steadily been upping their stake and RNS, released on the 4th September, announced that the company’s stake was at 29.5%.

Now to explain the strategy we need to highlight a previous recommendation made by London Stone Securities to its clients, on the very same basis. Mike Ashley, the owner of the retail group Sports Direct, started to see in the company Game a stake building exercise in the early part of this year – the percentage normally indicates a particular course of action and once a percentage ownership hits 30%, the stake builder must make a mandatory bid for the entire company and pay at the least the highest price paid by the bidder over the last 12 months.

This strategy can be profitable in identifying potential takeovers. The tactic in the case of Game was proved correct and clients profited from a takeover at 30p a share.

The Staffline position is currently 0.5% away from having to make a mandatory bid. This would automatically be triggered once the 30% threshold crossed. Now we know there is risk attached to this strategy as the bidder may actually never complete due to due diligence matters, or they may simply never own 30% of the company.

But the actions of HRnetGroup indicate a potential takeover move. This may or may not be proved correct, and depending on the time you are reading this, you may be able to profit or spectate from the intended result. Either way, we hope we have highlighted a valuable trade tool for investors that we have utilised at London Stone Securities in the past.