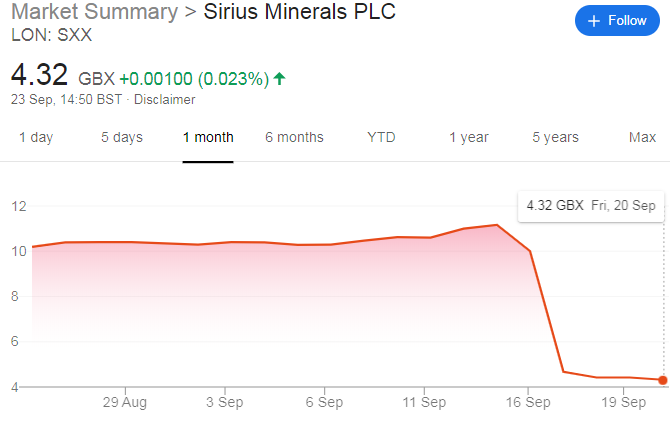 Last week was very bad for Sirius Minerals, the Potash miner based in North Yorkshire. The project is estimated to be worth up to £4billion, but the FTSE 250 firm fell by 60% when its latest financing deal was scrapped by the Government, which refused to guarantee multi-million-pound loans for the huge fertiliser mine near Whitby, in Yorkshire.

History
Founded in 2003, the company initially focused on exploring the potential for potash mining in North Dakota. However, after abandoning attempts at overseas exploration in February 2012 and following approval from the North York Moors National Park Authority in June 2015, the then AIM-listed company stated that it would seek financing in order to begin construction at the Woodsmith Mine in North Yorkshire. It was admitted to the main market in April 2017. The company has 85,000 individual shareholders. About 10,000 of these are located in areas surrounding the Teesside project, where many people invested because of the regenerative benefits for the North East. At 5%, the region has the highest unemployment rate in England and Wales, according to the Office for National Statistics. Sirius said the project would generate about 4,000 jobs. The company aims to exploit the world’s largest deposit of polyhalite, a type of potash that is sought after due to the fact it can help produce higher yielding crops.

Recent developments
On the 19th July Sirius Minerals announced they would be raising $500million senior secured notes due for redemption in 2027. The company updated the market less than a month later in early August, stating that they would be suspending the offer with the update: “The Company intends to revisit the market when conditions have improved later this quarter”. The writing was somewhat on the wall, but the market did not react at this point. But clearly something was prompting large sales from hedge funds and institutional investors such as Citigroup and The Capital Group Companies, Inc. They may have sold luckily or coincidentally enough just before the RNS 17th Sept, which prompted the large fall in the share price. The market reacted and in early trading the price hit a low of 2p. The day range went from the low of 2 to a high of 7p during the day.

LSS view on SXX
Sirius Minerals is evidence of a good story share. Investors who believed in the story invested with a possible emotional bias, and this may have led to an under diversification and what is know as concentration risk which has stung investors badly. Stories on investor forums of individuals losing their life savings, large percentages of their entire pension funds and even stories of people contemplating suicide. This clearly is a dire situation for all holders, but we cannot help feeling that some things could have been done differently to prevent the situation Sirius finds itself in. Typically, large CAPEX projects are long term and suffer major fluctuations in the share price, and this is no different with Sirius.

The Bond issue was key to Sirius’ future. Securing the funds would unlock a further $2.5bn (£2bn) in financing from US investment bank JP Morgan.
Sirius has embarked on a strategic review, and unless the company finds another way to raise the money in next few months, it may face going into administration. There is a feeling that the debt side of things may have intentionally run the company down for large investors to take the company private, this would essentially wipe out the small equity shareholder. Obviously, there is no way to prove this is the case, but a very similar situation is occurring right now with TCG.L Thomas Cook. The destructive and dilutive nature of debt to equity swaps has been felt by the shareholders during the years in many companies and there is no protection for the equity holder. Whilst positions like Thomas Cook and Sirius Minerals may succumb by the huge debts they hold, this does not mean the share price may automatically go to zero in the short term. Sirius has 170million in cash still and has a few months to find alternative investment.

With the market being irrational and some say rigged, it could easily double the price or half it on a whim. With shorts increasing we feel that maybe the falls may not be over for Sirius, so the savvy investor may choose to place orders in the market to capture these falls. If Sirius starts to recover the consensus would be one of taking profits when they occur, until the company provides an update for the financial security of the company going forward. This could be a very good Christmas present at the current levels, or a complete disaster, with a large free float of shares available, limited institutional investment and increasing shorts, we think the price will remain volatile for a while, which could create some good opportunities in the near term.

Those old enough to remember Poseidon will remember the massive rise and fall of the stock—these shares all have one thing in common: they all had a good story but often the story lures the retail investor in then the company collapses only to be bought up on the cheap and taken private. We view Sirius as a risky, but interesting proposition if the market believes that there is even a rumour of potential funding then this share price will move up quickly.