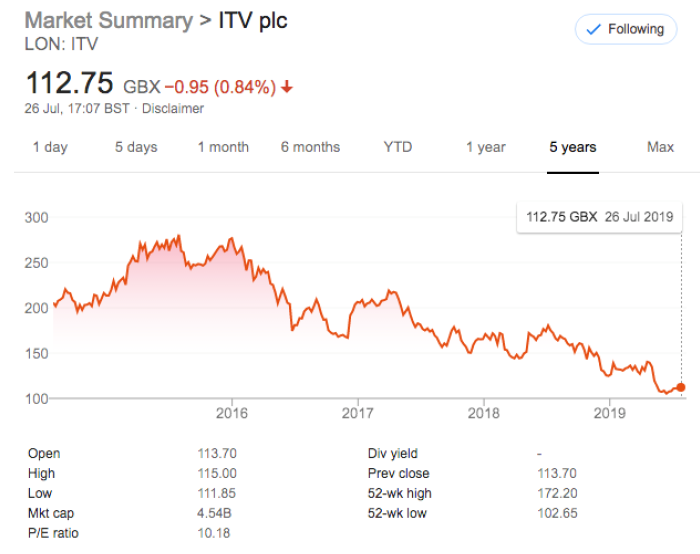 ITV plc is a British media company based in London, England. It holds 13 of the 15 regional television licences that make up the ITV network, the oldest and largest commercial terrestrial television network in the United Kingdom. ITV studios have diversified their business model by capitalising from their competitors success. They have achieved this by producing some of their most successful shows. These include the BBC’s Bodyguard, Channel 4’s Come Dine With Me and Netflix Showpiercer to name a few. ITV Studios lies behind many of the most popular
programmes on television today, in the UK and abroad. Profits from producing and distributing content now account for almost 31% of the group’s profits, up from just 18% in 2011.

Despite this progress, ITV shares have fallen significantly since 2016. One reason for this appears to be the fear that traditional broadcasters will struggle to adapt to the growth of on-demand subscription services such as Netflix. Industry data show advertising spending is migrating online. Traditional broadcasters could be left with declining profits and falling viewership.

More recently, questions have been raised about support for participants in ITV’s reality television series. This issueemerged following the deaths of a participant in The Jeremy Kyle Show and of two former Love Island contestants.

Another concern is macroeconomic factors may be affecting performance. In May, ITV said that “economic and political uncertainty„ would continue to hit advertising revenue this year. However, as in 2018, some of this expected decline should be offset by “double digit growth in online revenue„ and continued growth from ITV Studios, where revenue was already £120m ahead of last year.
Regardless of the short-term headwinds facing this business, it’s important to remember that ITV remains highly profitable and cash generative.

The markets may not yet recognise the longer-term potential of the firm’s strategy. The low share price may offer investors the chance to buy a proven dividend performer at what could be a bargain price. ITV Studios business model has allowed the firm to benefit from the commercial success of rivals such as Netflix, BBC and Sky. Proof of this is that ITV Studios has produced some of the biggest hits of recent years on non-ITV channels. This adds weight to their long term revenue.

Their own television views have also been doing well. In 2018, ITV’s free-to-air channels gained 23.2% of viewers, up from 21.7% in 2017 and 21.3% in 2016. Online viewing also rose as users spent 446m hours watching ITV programmes online during the first half of 2018. That’s a 32% increase on 2017. The ITV Hub-on-demand service now has more than 27.6m registered users, including 79% of 16-34 year olds in the UK. The number of paying subscribers to the ad-free Hub+ service tripled to 265,000 in 2018. In the US, the BritBox US service now has more than 500,000 subscribers. Advertising revenue from online viewing rose by 36% last year, offsetting by far the decline in traditional advertising. This joint streaming service venture BritBox between the BBC and ITV will provide a broad range of UK-focused content to subscribers, an area where ITV has identified strong demand.

The company is also taking steps to improve the profitability of online viewing, which is currently lower than that of traditional broadcast television. To address this, money is being invested in technology-led areas such as data analytics and targeted advertising. Chief executive Carolyn McCall is targeting £100m of extra revenue from direct to consumer services by 2021. This includes subscriptions, competitions and live events. Progress has been strong — in 2018, direct to consumer revenue rose by 25% to £81m. The number of “paying relationships” with viewers rose by 27% to 8.5m. This gives confidence the company could achieve it’s target.

Including investment in BritBox, ITV expects to spend an extra £65m in 2019, offset by £15m of cost savings. The group expects to get all of this money back through extra revenue, but 2019 will be a year of investment. Profits are not expected to return to growth until 2020. There is the risk that advertising revenue may be negatively effected in a recession or if the firm started to
spend excessively. There are no signs of that as present and taking the above into consideration, I believe ITV is laying down strong foundations which can help them maintain their dominance and further strengthen their position in the future. Now looks like a suitable time to take advantage of the lower share price as this stock could be a successful income based investment.

ITV shares are trading on around 8 times forecast earnings and offering a dividend yield of over 7% and in recentyears, the shareholder payout has been comfortably covered by profits and by the firm’s cash flow.