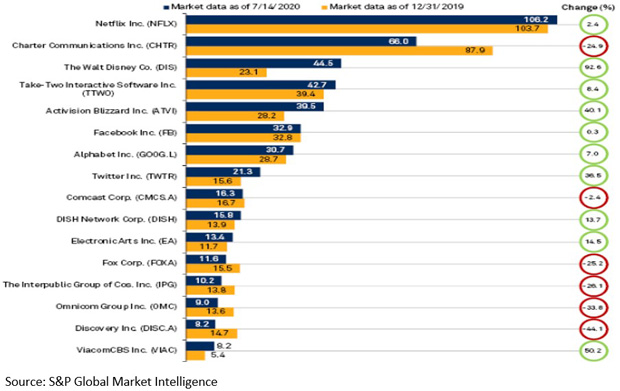 It’s tough to be excessively positive on the outlook for corporate profits in the midst of a global pandemic. But that’s not going to stop eternal optimists as we dive deep into the UK quarterly reporting season. This period provides UK investors with an opportunity to look beyond the health crisis to provide justification for the sharp stock market rebound we’ve seen in recent months.
Stocks have spiked higher whenever companies have managed to imply stabilisation. But market treatment can be brutal towards those companies that counter the argument. This applies both to companies here in the UK and in the US.
Take Netflix. The second quarter results sent shares of the video-streaming giant down more than 6.5%, following a four-month surge that propelled its stock and market valuation to record highs. This had been a darling of the “work-from-home” investment theme promoted by several investment houses.
But in a letter to shareholders, company management admitted that the gains in the first half of the year were unsustainable. Subscriber number gains were likely pulled forward from later in the year, which means fewer new additions during the rest of 2020. Netflix also offered revenue guidance of $6.33bn, below analyst estimates of $6.40bn. Crucially, the company expects 2.5m net subscriber additions in the third quarter; analysts had predicted 5.4m.

Further concerns surround “paused productions” on original shows and films in the first half of 2021, based on its long lead-time content production schedule. So, on the one hand, Netflix reaped the benefits of people forced to spend more time at home. But the virus has also made it more of a challenge to continually refresh the programming going forward. We are not yet back to status quo.

In that context, it’s no surprise that the share price and valuation came under the spotlight. Netflix has maintained a stock price-to-earnings (P/E) ratio well ahead of its technology, media and telecommunications peers throughout the pandemic period. And that’s in the context of an overall sector that has been hyped based on the work-from-home narrative and a resilience to the coronavirus. In this environment, expensive stocks have shown how much at risk they are if they disappoint on the earnings front.
But there’s also an argument currently being pushed that bad earnings numbers could actually be good for the market. According to research by Ned Davis Research, the S&P 500 has historically turned in its best returns during quarters in which its earnings per share (EPS) were lower than in the year-earlier period. In other words, poor results may in fact be positive, contrarian as it may sound. That outcome may reflect the fact that the market is already eyeing a rebound in earnings a year ahead. The same research suggests that in quarters in which earnings were much higher, the S&P 500 has performed far less well.
The data, which goes back to 1927, suggests that the S&P 500 has performed the best in calendar quarters in which trailing 12 months’ EPS are between 10% and 25% lower than in the year-earlier quarter. Its average return during those quarters is an annualised gain of 27%. 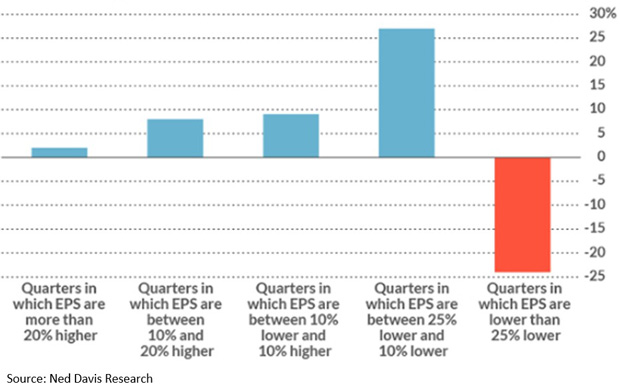 The reality is that the UK and US reporting season is one of the most significant in over a decade. This quarter’s results will feature the most severe impacts of the economic lockdowns and recession. This is also taking place at a time where the US remains deeply entrenched in a health crisis.
Investors know that earnings this results season will be poor. Companies had already signalled as much. But how poor the numbers are, and whether the results can justify the market valuation, will really determine whether stocks can see further outperformance.
Receive Latest News