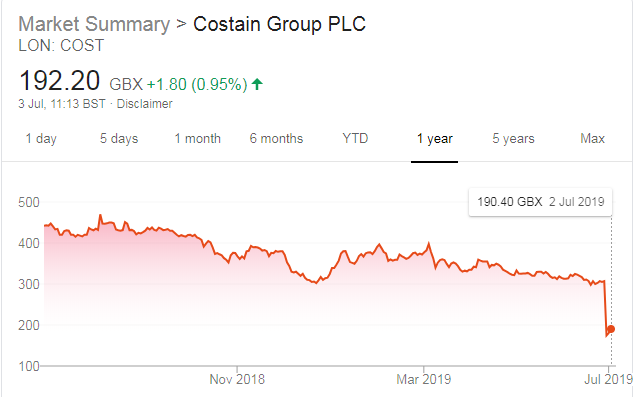 The FTSE is currently trading within a very tight range – we are experiencing minimal volatility which is unusual, in particular when considering the events occurring around the world at present. There’s a chance we will see further tensions over the weekend since the G20 meeting which led to Trump making further progress with trade talks with China.

This week we saw a large fall in another building/contractor services provider, Costain. The company fell 43% on the release of the 6-month trading update. The company says projects including the M6 Smart Motorway, Preston distributor road and HS2 Southern Section have been affected by delayed start dates. An upgrade to the M4 motorway at Newport was cancelled by the Welsh government earlier this month. These setbacks mean underlying operating profit for the year is expected to fall by more than 20%, to between
£38m and £42m.
There will also be a one off 9.8 million charge based on remedial work dating back to 2006. We look at the company the case for potential investment and the further risks that may be attached to Costain at present. The company dates back to 1865 and has been credited to building large scale housing projects, petrochemical factories, airports and shopping centres to name a few. The company’s current share price can be seen below – there has been quite a fall over the year from a high of 470/share.

The company suffers from similar risks as others operating in this sector like Kier Group, Mite, Serco, Interserve, and Carillion. The risks are bad project management, delays in project revenue and historical legacy issues. Most of these risks are normally not seen during the good times. During periods of economic difficulties companies tend to reign in expenditure and manage costs more carefully, therefore profit margins are squeezed. Companies that can step in and bid for large scale billion-pound revenue projects then have the task of working on schedule and have limited margin for error. The issues arise when things do not go to plan and budget. This can naturally happen, but the lesser profit margin experienced on a project, the higher the risk of the whole thing turning into a loss-making exercise. This is how you can have a billion-pound revenue project actually making a loss of the contractor if costs over run. The other big issue is debt management the
contractors generally do not receive the full revenue upfront and have to borrow (gear) % to get the jobs done. This means borrowing may exceed revenue for that particular project if the costs are not well managed. These issues, such as high levels of gearing and bad project management, led to the demise of Carillion which was traditionally seen as a lower risk dividend paying stock.

This case, amongst others, has left the contractor services sector well out of favour with today’s investors. Costain’s recent fall has certainly contributed to this feeling of disinterest in the sector. But there may be some very good examples of companies that may be worth looking at for your portfolio and we believe Costain is one of them. The company has a market cap of 182 million, with Friday’s fall wiping off nearly 100 million from the value of the firm. The dividend in most cases like this is the first to suffer as the company will probably look to cut it at the first
available opportunity. The position should now no longer be viewed as a dividend stock but a company that could recover over time and provide a good capital gain at this sort of levels. The most important factor to consider which differentiates the likes of Costain to Carillion is the cash levels of the company. Near its end, Carillion did not have the money to even pay their trade debtors. Costain has circa 65million in cash and looks to on the surface to have a relatively robust balance sheet. If investors are braced for a dividend cut which could actually make the stock rise as the market does not favour large dividend payers that are going through financial difficulty ,then Costain looks to be an interesting play. Aside from the impairments and remedial work there is plenty of opportunity for the company to make back some of the lost ground through their 4.2billion order book. Assuming there isn’t any further skeletons in the closet and with 65 million in cash, the company is unlikely to do a fund raise.

There may be over the next few weeks a few director buys which would also signal the worst may be over. Of course, there is the risk the company could fall further from this level but that would be relating to information the market does not know yet. With all things considered, the company looks good at these levels.

We hope you enjoyed this report from London Stone Securities. If you would like further information , contact us on 0203 697 1700 or email us at enquiries@londonstonesecurities.co.uk