Why is the stock market doing so well when we are heading for a recession?

The stock market and the economy continue to go their separate ways. That’s because bad news simply isn’t enough to derail a market that confounds expectations. UK investors and indeed investors around the world need to adapt to this new normal. But as always, it’s the US market that we need to take direction from because that will be the mother of all indicators in terms of where we are headed here in the UK. Economic data has clearly deteriorated at a faster-than-expected rate. In the first quarter of 2020 the US economy slowed at its fastest rate since the financial crisis – and this was before the full scope of the lockdown was in place. Private payroll numbers fell by more than 20 million in April, which is the worst drop in ADP survey history. Elsewhere, non-farm payroll numbers fell by a record 20.5 million during April. It was the largest ever drop, bringing the employment numbers to 131 million, its lowest level since February 2011. The unemployment rate also hit an all-time high of 14.7%. Hotels and restaurants were particularly ravaged by fear of the virus and the resulting shutdowns. They cut 7.6 million jobs, at least temporarily, as Americans stayed home. Most retailers were also hurt, especially those without a strong online presence, as foot traffic dried up. Retail employment fell by 2.1 million. 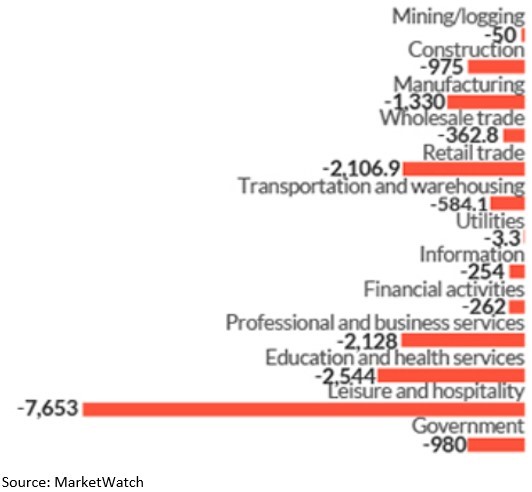 Europe has been no better. France’s most recent GDP release showed a 5.8% decline, Spain’s by 5.2% and Italy’s by 4.7%. Overall, the eurozone economy fell by 3.8%, the biggest drop since records began in 1995. Lockdowns were imposed much sooner than the US, so the US has more pain to come. A few months ago, the market seemed to be absorbing the magnitude of the situation. In February, the S&P 500 fell more than 8%. Not to be outdone, March was one of the worst months in market history, dropping more than 12%. That performance came as no surprise. And yet April was one of the best-ever months of performance in the US, and the best since 1987. Much of that market momentum rolled into May, even though this is usually the start of what is traditionally one of the weakest calendar periods of performance for US stocks. Even White House economic adviser Larry Kudlow admitted that it will be some time before the financial situation in the US gets better. He said the country still has a long path to travel before Americans begin to feel any positive effects regarding the employment picture or the economy, as states begin to gradually reopen. Best months for S&P 500 since 1926 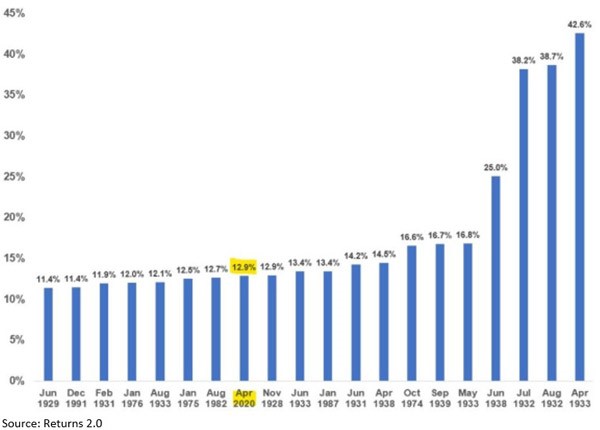 Still, the stock market rolls on undaunted. Some of the support for the market reflects confidence in the extreme measures introduced by central banks to stabilise the wider financial system. The aggressive stance has gone beyond that seen during the global financial crisis, and this hasn’t escaped the attention of investors. The market is also a forward-looking mechanism. Plenty of damage has been done, but investors are already focused on how the economies around the world will rebound once lockdowns end. And given that this is a US election year, and President Trump needs a bustling economy to support his re-election campaign, lockdowns ending there could be sooner rather than later. The trouble is the outlook for long-term growth will depend largely on the speed and strength of such a recovery. And there is still a sense that the market is pricing to perfection a seamless, frictionless rebound. So UK investors need to realise that plenty of risk still remain on a global scale. Exits may be delayed or challenging. The virus has still not yet been curtailed. In Asia, where the coronavirus first hit, several countries including China and South Korea have experienced an uptick in cases after restrictions were eased. This could signal a future path for the US and Europe – a second wave of infections. And even if we do see a perfect exit, corporations have still to adapt to the new normal of a weaker global economy. All of this suggests that we may still test lower levels in the stock market than we are seeing right now. Recent share price performance may not reflect the true story. Markets are not always efficient and nor are they right all of the time. This could be one of those times. If you would like clarification on any of this information or you'd like to suggest a topic for a future newsletter, you can reach us on 0203 697 1700 or email enquiries@londonstonesecurities.co.uk.   All investments involve risk and past performance will not necessarily be repeated and is no guarantee of future success. You should carefully consider in the light of your financial resources whether investing in stocks and shares is suitable for you. This material has been prepared based on information believed to be accurate at the time of publication. Subsequent changes in circumstances may occur at any time and may impact the accuracy of the information.