Ferrexpo mines for, develops, processes, produces, markets, exports, and sells iron ore pellets to the metallurgical industry worldwide. It has a customer base supplying steel mills in Austria, Slovakia, the Czech Republic, Germany and other European states, as well as in China, India, Japan, Taiwan and South Korea. Click here to download the full report. 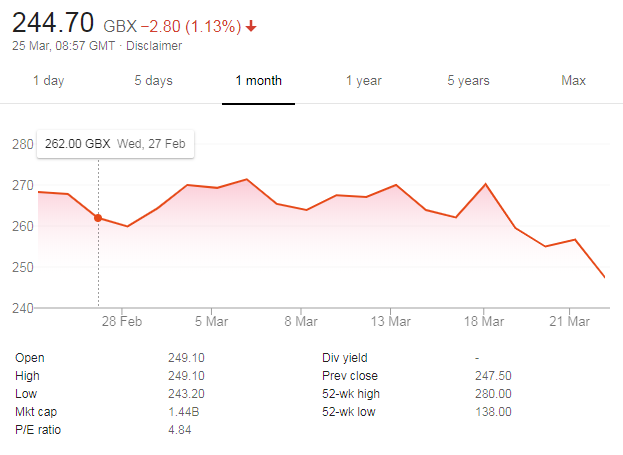 Background Ferrexpo mines for, develops, processes, produces, markets, exports, and sells iron ore pellets to the metallurgical industry worldwide. It has a customer base supplying steel mills in Austria, Slovakia, the Czech Republic, Germany and other European states, as well as in China, India, Japan, Taiwan and South Korea.   Dividend record  If you are an income investor, then Ferrexpo should be on your radar. FXPO has paid a consistent, reliable and competitive dividend over a long period of time, and is expected to continue to pay in the same manner for years to come. Over the past 10 years, the UK company has been growing its dividend payments, from $0.064 to $0.20. During this period it has not missed a payment. More specifically:

Ferrexpo’s dividend yield stands at 2% which is on the low-side for Metals and Mining stocks. But the real reason Ferrexpo stands out is because it has a high chance of being able to continue to pay dividends at this level for years, something that is quite desirable if you are looking to create a portfolio that generates a steady stream of income. The company currently pays out 12% of its earnings as a dividend, according to its trailing twelve-month data, which means that the dividend is covered by earnings. Going forward, analysts expect FXPO’s payout to increase to 26% of its earnings. Assuming a constant share price, this equates to a dividend yield of 4.6%. In addition to this, EPS should increase to $0.62. The higher payout forecasted, along with higher earnings, should lead to greater dividend income for investors moving forward. Dividend cover is excellent at 10.1. Once the dividend increases to 4.6%, cover will remain at 4.5. Recent News - 19th March 2019 FXPO fell heavily recently as it announced that it has delayed releasing its financial results, as auditors continue to investigate discrepancies in the bank statements of Blooming Land, a charitable organisation at the heart of the company’s community programme in Ukraine. Auditors are widening their inquiries from the bank statements to the way the funds were allocated and spent in Ukraine. In an earlier announcement in February, FXPO said that donations to Blooming Land amounted to US$9.5mln in the first half of 2018. The company ceased donating in May 2018. Some or all of this money now appears to have not been utilised for that purpose. The company said it is committed to “understanding” the full extent of these issues. Auditor Deloitte has indicated that it may qualify or otherwise modify its audit opinion relating to the full year accounts, pending the outcome of the case. As it stands though, Ferrexpo expects the full year 2018 earnings before interest, tax, depreciation and amortization to be in the region of US$500 million. Broker Forecasts The consensus forecast amongst 15 investment analysts a covering Ferrexpo advise that the company will outperform the market. For example, HSBC have raised their price target to 310p from 255p.