Rank Group - worth a gamble?

Overview The Rank Group is a gambling company based in the United Kingdom. Rank was involved in the cinema and motion picture industry until 2006, and continues to use the Gongman logo originally used by the Rank Organisation's film distribution subsidiary General Film Distributors. Its brands now include Mecca Bingo and Grosvenor Casinos, the UK's largest casino operator. Rank’s principal market and headquarters are in the United Kingdom, where it operates Grosvenor Casinos (56 casinos), Mecca Bingo (96 bingo clubs) and Rank Interactive (online gaming and betting). It also operates additional Grosvenor Casinos clubs in Belgium (two casinos), and Rank España in Spain (10 bingo clubs). Rank is listed on the London Stock Exchange and is a constituent of the FTSE 250 Index. 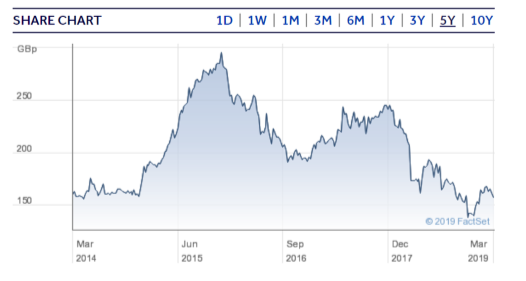 We can see Rank Group has been significantly higher over the five year period. We are currently trading at around 156p. On the surface the company looks to have posted some pretty disappointing half year results, with revenue down 2.4% and profit before tax down around 27%. The company blames declining numbers, increased customer due diligence and taxation to be some of the reasons for the lacklustre performance. The company’s dividend is around 4.7%, not particularly attractive, and currently trades on a P/E of 10.4, which isn’t great when compared to companies in a similar peer group, GVC for example, on a P/E of 7. Management have insisted on stating they are still on track for the full year and Q2 has already posted some improvements over Q1. What else might attract a potential investor to Rank Group at present? From the outset, the company does not look particularly exciting.   Three points lean in favour of Rank as being a stock to watch; The first being digital revenues which have been on the rise, gambling is moving more towards an online focus and Rank are making good headways in this area. Secondly, the company has also reduced net debt and increased its cash position which is generally a good sign as they are being conservative with borrowings. The final and main reason why Rank Group may see an uptick in business is due to regulatory change in the UK, thefixed odds betting terminals that have plagued the UK highstreets since early 2000s are due to have a drastic stake cut, from £100 to £2 a spin. The changes are due to come into effect from 1 April 2019, the government will stand to lose significant tax revenue and no doubt the book makers will be forced to close stores. Some say this action has come into play far too late in the day, with many individuals having lost thousands at the hands of these machines. The general landscape has created a nation of gamblers that now have had their quick win fix cut off quite abruptly and this could mean big business for the likes of Rank Group that own Grosvenor casinos. The legislative change will drive punters into casinos where the stakes are a lot bigger, and the losses also, but one could argue that going to the trouble of going to a casino will limit the ad-hoc nature of gambling in the high street, also the casino environment is a lot more regulated and controlled comparatively. The customer numbers may increase which in turn could drive profitability for Rank. The 52 week low is circa 129p, so we are not a million miles away from the lows. Rank whist not likely to do anything spectacular may still reward investors with percentage gains from its current levels over the next few months. We hope you enjoyed this report from London Stone Securities, if you would like to talk to us about further opportunities then feel free to get in touch on 0203 697 1700 and we will be happy to help.