Greatland Gold is a company trading on the UK AIM market. We have covered the company before but we will now revisit it based on new grounds for investment. Greatland was brought to attention in 2016, at around 0.28p mark—today the company trades at around 1.98p and we believe it has a lot more potential, so let’s take a more in-depth look at it. 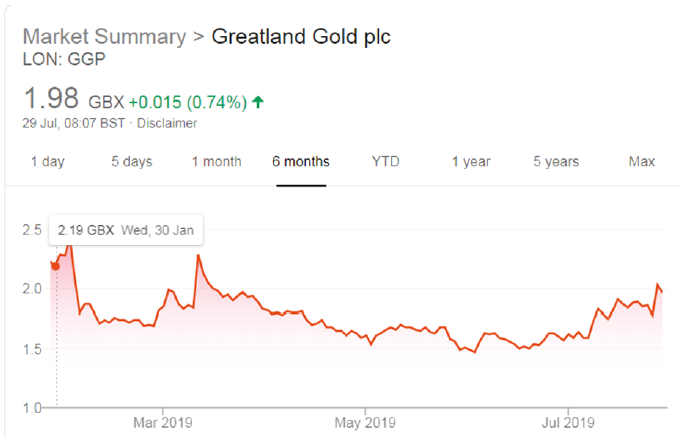 Greatland has had, over 5 years, a number of very big spikes followed by large retracements, that allow for individuals who believe in the company to either have sold at a large profit or add further to a longer term investment. Accumulating shares in this fashion can be immensely profitable, assuming the company goes on to do what it is supposed to do, i.e. find gold in large quantities at a low cost of production.

The Company was established in London in 2005 and admitted to AIM in July 2006. GGP’s primary focus is on the geographical region of western Australia and Tasmania, where they have 6 fully owned exploratory sites that are currently undergoing drilling and assessment for further potential gold, copper and cobalt finds. The company finished the six month period in December 2018 with approximately £4mln in cash. This money will be used to continue with exploration work across the company’s Australian assets, including follow-up work on Havieron, where Greatland drilled a world-class intercept of 275 metres grading 4.77grams gold and 0.61% copper.

Newcrest Mining has pounced on one of the most exciting mineral discoveries in Australia in recent years, striking a deal that will see it pump $US65 million ($92m) into the Havieron copper-gold project in Western Australia’s Paterson Range (reports The Australian). According to RNS dated 12 March, Newcrest mining, one of the world’s largest gold producers, has announced a $65million farm-in joint venture deal for one of Greatland Golds prospects. The key terms of the Agreement as set out in the announcement released by Greatland stipulate that Newcrest has the right to acquire up to a 70% interest in 12 blocks within E45/4701 that cover the Havieron target by spending up to US$65m (roughly £50m or AUD$90m) and completing a series of exploration and development milestones in a four-stage Farm-in over six years. When looked at in isolation, the figure can be seen as quite a low-ball offer as the potential for what Greatland Gold could have could be excusing the pun, “great”. The project carries still many costs and risks and Newcrest are currently bringing something to the table in terms of world class expertise in the area and investment, this should be seen as a very positive move for GGP. More recently the company announced they will be commencing its first drilling campaign at Greatland's 100%-owned Black Hills gold project in the Paterson region of Western Australia. The drill programme includes approximately 20 Reverse Circulation ("RC") drill holes to depths of up to 300m for approximately 6,000m of drilling. The drill programme has been designed to test an Induced Polarisation ("IP") chargeability anomaly, approximately 1,400m in length, which is spatially coincident with gold mineralisation identified at surface. The data that should be due in July and one to watch out for as a price catalyst is the field reconnaissance activities in the Panorama project. They have located numerous gold nuggets, confirming the presence of mineralisation over several kilometres of strike at the Company's 100% owned Panorama project, located in the Pilbara region of Western Australia. With gold now currently above $1400/ounce this may be a good time to look at a high prospect explorer with targets identified and high levels, in GGP’s case 100% of ownership of sites. GGP tends to trade in a range, it looks though now to have been recovering from the 6-month lows of around 1.5p and moving back towards the 2p mark. We believe that with the right news Greatland Gold could break the 2p barrier and beyond, it is known there are a number of options and warrants outstanding that could have a dilutive effect on the share price. The company have circa 3.3 billion shares in issue, they have in August warrant and option expiries and also in September of this year. This means if the companies share price does not trade higher than 2p in August and September then these options expire worthless. 204,700,000 @ 2.0p (expire August 2019) 11,363,636 @ 2.0p (expire September 2019) The company could try and get the share price higher to incentivise the activation of these options. With all good AIM stocks in the end the long term holder (LTH) wins, if the company is scalable and grows as expected then many times initial investment is certainly possible and the indications are early but good, Greatland Gold could be one of those companies. Long term holders tend to not worry about short term fluctuations and instead treat sell offs as a buying opportunity, with the AIM being somewhat devoid of Australian gold miners, GGP certainly looks like one of the best out there, so watch for recent news updates regarding the company progress and expect the company to pass the 2p level mark.