The recent strange market open delay that occurred a few Fridays ago was highly unusual. Only the computer-controlled FTSE 100 and 250 were both affected, with the AIM market trading as normal. The markets opened at around 10:30am, a delay of nearly 2 and a half hours. Could these strange events be a precursor to something bigger? During the 2008 crash, in September of that year the NYSE bell which signals the open failed to go off, which then led to a major sell off for the day. We will be paying attention to how many convenient “technical glitches” or trading anomalies may occur over the next few months to take them as a sign of things to come. With that being said, it is important to realise that the small cap markets are unaffected by the trade outages experienced on the day, so we thought it may be a good time to highlight a small cap play that seems interesting right now. The mining sector has been a staple part of the AIM market since its inception, and has been funding one man and his shovel successfully, or for the most part unsuccessfully, for many years now. With countless failures, it’s important to pick carefully your next future Glencore or BP. Today we will be looking at Galileo Resources (GLR), a mining company that looks to undertake projects around the world where the value of said projects is not truly reflected in the costs of acquisition. The current main focus is on the Star Zinc project in Zambia, close to Lusaka. Significant zinc intersections have been made in a recent drilling programme and the fundamentals point towards a developing zinc mine. The Company owns a 38% interest in the Glen over Phosphate project and is negotiating a long-term off-take agreement with a major fertiliser producer subject to certain product specifications. The tailings material will contain high values of strategic rare earths which have shown themselves to be capable of producing a rare earth product for international refinery. Galileo has a 100% interest in a highly prospective Ferber copper/gold project in north-eastern Nevada. The project is close to gold exploration, where claims are being made as to an emerging new Carlin Trend. 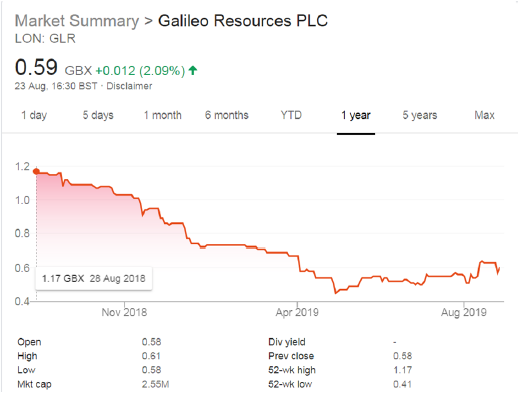 The Company has retained a 15% interest in the Concordia copper project in the O’kiep district of the Northern Cape of South Africa. As we can see the share price over 1 year for Galileo has been somewhat of a disaster, investors would have lost nearly 50% over the period. Currently though, at a 2.5m market cap, having recovered from a 52-week low, there is plenty of potential news flow we can see that could move Galileo up significantly from its current levels. Assessment The star zinc project in Zambia seems to be where all the focus is at the moment for Galileo, if they can pull it off they may be able to supply Zinc to the company Jubilee Metals Group PLC, which is an entirely separate company also listed on AIM, but is far bigger in scope with a market cap of 52million. The company could create strong synergies here with expected revenues of circa $15million per annum and costs that would be around 2million. This all for a company currently capitalised at 2.5million. In addition to the Zambian developments, the company owns a 38% working interest in the Glenover Phosphate project in South Africa, the company has recently announced that tailings from the Phosphate ore contain high grades of REE (Rare-Earth Elements). Recently, the trade war between the US and China has seen increasing importance being placed on sources of Rare Earths outside of China for strategic purposes. Finally, the company have a 100% interest in a gold/copper project in Nevada, with recent gold prices surging it may be a good time to either create a JV or sell the project on which should net Galileo a tidy sum. As an AIM company, and a mining one, the company is not devoid of risks, aside from the generic risk warnings. AIM issue securities carry a higher degree of risk than main market shares and there are specific risks which need to be mentioned. With the recent raft of positive updates, it is quite suspect why the share price hasn’t moved up from its current levels, there could be a large seller in the background, which typically puts a lid on the price until the seller has “cleared”. Another point worth mentioning is the company has a significant amount of projects/raw material discoveries made. But getting the materials out of the ground is expensive and excavation costs a lot. There are plenty of companies sitting on major discoveries who do not have the cash to fund excavations. Galileo has limited cash, a placing which was done for earlier in the year for 500k has probably been spent by now, and essentially the company may need to do another placing unless it can find an alternative source of funding, but the drop that inevitably happens when an equity issue announcement is made may be only temporary. Please note London Stone Securities holds a small non-material interest in the stock across its clients/employees.