Are we headed for a Double-Dip in the Stock Market?

The US stock market is yet to re-test its late March lows, even though background challenges remain. UK investors should therefore remain vigilant. From an economic perspective, the deterioration continues. More than 26 million Americans filed for unemployment over the five weeks running up to the end of April. The coronavirus spread may be peaking in some parts of the US, but it remains a major impediment to normalisation across most states. We are seeing similar uncertainty in the UK and the rest of Europe. The search for treatments that work against COVID-19 continues. The failure in a Chinese trial of Gilead Science’s much-heralded Remdesivir drug, for example, disappointed investors. Then there have been the more obscure suggestions offered up, that may indicate just how far away we may be from a solution. Falling into that camp was President Trump’s proposal that injected disinfectant might be used as a remedy. In addition, the US results season that has started to reflect the large-scale demand destruction and lack of earnings visibility. Blue-chip companies have been withdrawing guidance amid the uncertainty of how the coronavirus and shutdowns are impacting their business. And, of course, it would be amiss to not mention the extreme volatility that has come with the oil price collapse. So, what’s prevented the stock market from going into freefall? One dynamic supporting the broader market has been the performance of the technology sector, and, in particular, a narrow band of names. The five largest stocks in the S&P 500, Microsoft, Amazon, Apple, Google and Facebook, collectively represent a higher percentage of the market than any other five stocks since the late 1970s. Combined, these names account for over 21% of the S&P 500’s market capitalisation. As a result, they have had a major distorting effect on how the market performs.

Those same five largest stocks have as big a weighting in the S&P 500 as the bottom 350 stocks in the index. So, while the rest of the market has crumbled at times, these big-cap names have continued to march on. Microsoft alone represents ~5.5% of the index, higher than its peak weighting during the dotcom bubble. 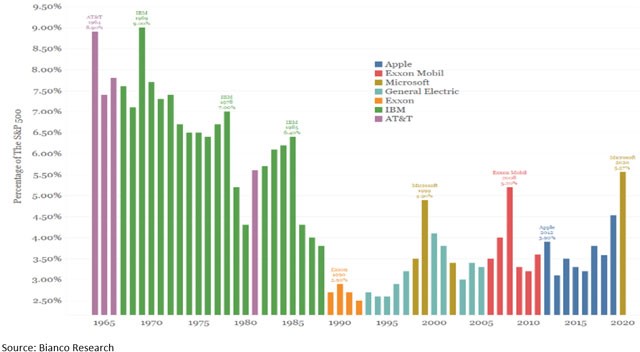